Handover of a New School Block to A. I. Steenkamp Primary School in Katutura East Constituency, Khomas Region 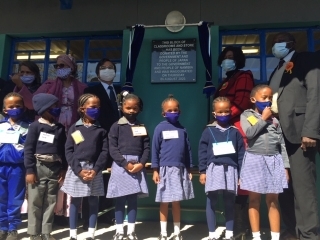 On Thursday, 6 August 2020, a handover ceremony of a new school block which was funded by the Government of Japan through its Grant Assistance for Grassroots Human Security Projects (GGP) was held at A. I. Steenkamp Primary School in Katutura East Constituency, Khomas Region. H.E. Mr. Hideaki Harada, Ambassador of Japan, officiated the event and handed over the facility to Hon. Rachel Jacobs, Chairperson of Khomas Regional Council on behalf of Hon. Anna Nghipondoka, Minister of Education, Arts & Culture. The ceremony was conducted under strict COVID-19 preventive measures, such as wearing masks.
Due to a shortage of classrooms, pre-primary learners of the school were accommodated at makeshift classrooms which were 30 minutes away from the main school campus on foot and caused safety and security concerns as well as limited interaction with teachers and other learners.
It was against this background that the Government of Japan extended a grant of 1,102,572 NAD for building a new school block consisting of five permanent classrooms and one storeroom. This new school block will be used by 150 pre-primary learners who will be resuming their face-to-face learning next month together with all other learners on the main campus, easing the crowdedness of classrooms.
Education is one of the priority areas for the Government of Japan in its implementation of GGP to Namibia, and A. I. Steenkamp Primary School is the 40th school that the Government of Japan has assisted in constructing school blocks for the people of the Republic of Namibia.
At the ceremony, Hon. Jacobs, representatives of learners, teachers, and many others expressed their appreciation for the support from the Government and the people of Japan.