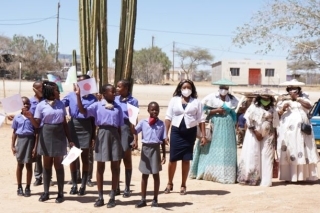 On Thursday 19 November 2020, a handover ceremony of a new school block funded by the Government of Japan through its Grant Assistance for Grassroots Human Security Projects (GGP) was held at Omatjete Primary School in Daures Constituency, Erongo Region.
H.E. Hideaki Harada, Ambassador of Japan to Namibia, officiated the event and handed over the facility to Mrs. Ernfriede Stephanus, Director of Education, Arts and Culture, Erongo Region on behalf of Hon. Anna Nghipondoka, Minister of Education, Arts and Culture.
Omatjete Primary School received a grant worth 717,887 NAD for building a new school block consisting of two permanent classrooms and one storeroom.  These new classrooms will be used by grade 2 and 3 learners who were subject to platoon system and will be resuming their face-to-face learning early next year.
Education is one of the priority areas for the Government of Japan in its implementation of GGP to Namibia, and Omatjete Primary School is the 44th school that the Government of Japan has assisted in constructing school blocks for the people of the Republic of Namibia. GGP aims at achieving direct and immediate impact on the well-being of disadvantaged communities at a grassroots-level by supporting relatively small development projects in areas of local needs such as education, health, and agriculture, to be implemented by non-profit organisations and local authorities.
The Government of Japan has been implementing GGP in Namibia since 1997. Three more schools are to be handed over new classroom blocks in the near future and five other schools are currently in the process of building classroom blocks.