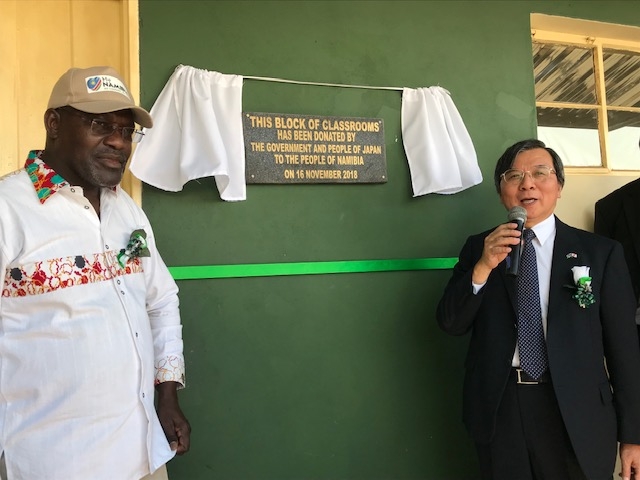 On 16th November 2018, a handover ceremony of a new school block which was funded by the Government of Japan through its Grant Assistance for Grassroots Human Security Projects (GGP) was held at the Ncagcu Combined School in Kapako Constituency, Kavango West Region. H.E. Mr. Hideaki Harada, Ambassador of Japan, representing the Government of Japan handed over the facility to Hon. Mr.Tjekero Tweya, Minister of Industrialisation, Trade and SME Development who represented the Government of the Republic of Namibia.

The grant assistance amounting to NAD 836,141.75 was utilised to build four classrooms and a store room. Upon handing over the facility, 145 learners of Grade 1 and Grade 2, who were studying either in temporary structure classrooms, or in overcrowded classrooms, moved into the new classrooms. All the learners of the Ncagcu Combined School are now learning in the permanent classrooms, under more conducive educational environment.